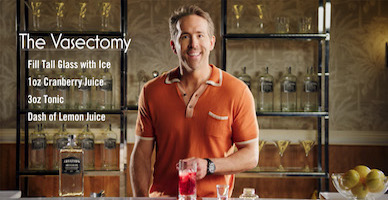 This June, Ryan Reynolds is helping exhausted fathers toast to the joys of parenthood with Aviation American Gin.

Reynolds’ marketing agency, Maximum Effort, made headlines in the ad world once again for a brutally honest Aviation American Gin spot starring the actor, business owner, and father of three himself. During the nearly two-minute video, Reynolds walks viewers through a hilarious cocktail-mixing tutorial, dropping not-so-subtle hints about the struggles of fatherhood. From filling a tall glass of ice the same way that “children fill our lives with so much joy” to naming the mixed drink “the ‘Vasectomy’ for no f***ing reason at all,” Reynolds knows that “the world’s highest rated job” deserves to be celebrated with “the world’s highest rated gin.” On top of it all, Aviation American Gin is partnering with Sourced Craft Cocktails to sell branded Vasectomy Father’s Day cocktail kits, the perfect gift for every dad who’s had enough this year.

Aviation American Gin’s realistic take on Father’s Day is far from the typical sentimental ads promoting this holiday, but it works, and Reynolds’ candid performance has parents everywhere laughing.