NFL Supports Charities with My Cause My Cleats Campaign 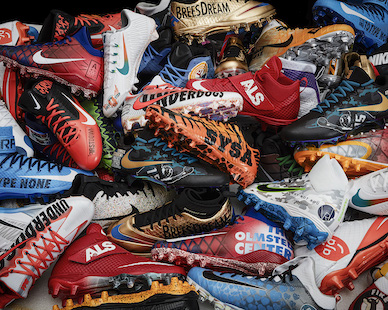 During all Week 14 games, hundreds of NFL players wore customized cleats to represent a charitable organization that’s near and dear to their hearts.

For the third year in a row, the NFL celebrated “Unboxing Day” on Giving Tuesday, where players revealed their customized cleats during hospital visits, in classrooms and locker rooms, and on stadium fields. Players also shared the stories behind their cleats on social media using the hashtag #MyCauseMyCleats. Nike, Under Armour, Adidas, and independent designers worked with the players to bring their visions to life. Fans have the opportunity to bid on many of these cleats at NFL Auction and all money raised will be donated directly to the charity.

Through the My Cause My Cleats campaign, the NFL is doing more than just raising money for a good cause. The players are raising awareness for hundreds of charities in a creative and memorable way while giving fans the opportunity to play a part as well.