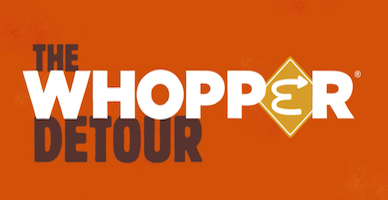 In December, Burger King ran a “Whopper Detour” campaign that allowed any customers near McDonald’s to unlock an offer for 1-cent Whoppers.

All customers had to do was download the Burger King app, get within 600 feet of a McDonald’s and activate the offer to get a Whopper for one cent. After an order was placed, the app rerouted the customer to the nearest Burger King to pick up their food within the hour. This campaign resulted in 1.5 million app downloads and the app also ranked as most downloaded in Apple’s App store for several days in a row.

Not only did the brand give customers a reason to download the app and explore its features, such as their new order-ahead service, but they also made McDonald’s fans think twice about where they should order their next meal from. The brand knows people, especially Millennials, view convenience as a requirement and is finding ways to play into that expectation.