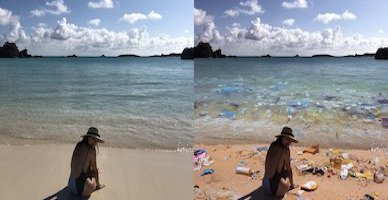 Water-filter maker Brita launched a social media campaign where influencers photoshopped trash into the background of their personal photos. Brita is drawing attention to the growing world concern for pollution while simultaneously raising purchase intent of its reusable, filtered water bottle.

Brita’s #NoFilterNoFuture campaign works with twenty-one social influencers who have a large enough following to raise awareness about the increasing amount of plastic accumulating in the world’s oceans and beaches. Brita’s campaign influencers include actress and blogger Kylee Campbell and vlogger Kevin Droniak, who each have roughly 100,000 followers. In addition to the influencers’ posts, Brita is supplementing this content with IGTV and Instagram Stories to showcase the benefits of its reusable water bottles and how the influencers use them.

Through its cause-driven campaign, Brita is able to distinguish itself from the competition and connect with younger audiences who tend to favor brands that support social issues. By demonstrating its commitment to protecting the environment, Brita will likely develop long-term loyalty among its consumers.