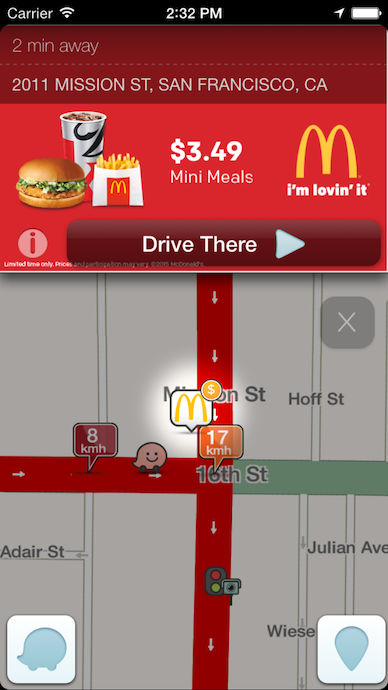 McDonald’s used geofencing technology to tie together the ads on their billboards with ads on the navigation app Waze.

Once anyone using the app came in close proximity to the brand’s billboard and stopped their car for several seconds, a full-screen ad popped up promoting the same deals as shown on the billboard. The ad also included a “Drive There” button that immediately provided the user with directions to the nearest McDonald’s. Over the course of eight weeks last October and November, the brand earned 6.4 million mobile impressions, reached 1.9 million unique users and navigated over 8,400 customers to their restaurants. McDonald’s tested this approach with 300 billboards in Southern California and plans to expand to five new markets this year.

Through this integration, McDonald’s found a way to give more prominence to their outdoor ads in an increasingly digital era. Since customers often make quick, last-minute decisions about visiting a fast food restaurant, the brand is smart to interrupt the consumer during that process with a very easy and convenient call-to-action.